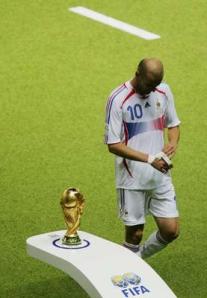 The 2006 World Cup Final. Italy versus France. The game that changed everything.

Amongst a cascade of geographical, political and ethical reasons not to, there was one purely footballing reason to support France ahead of Italy. They had the best player of the past decade on their team – Algerian born Frenchman, Zinedine Zidane, whose last ever game was to be that night in the World Cup Final. This event had been marked as the ‘Zidane Final’, the showcase for a man who had won everything and embodied all that was still beautiful about football.

More conjurer than footballer, more artist than sportsman, Zidane could do what he wanted with the ball – things that scientists might struggle to explain, let alone demonstrate. When his shoulder dropped the entire football watching demographic were sold a dummy. He was a hypnotist, an inventor, a magician: the best player of our lifetime.

Having a ball near to him was like a compulsion, an addiction; as soon as he passed it he wanted it back again. Zidane was drawn to the ball and the ball drawn to him. In all my years of watching football, I never once remember him giving it away.

Bald with piercing eyes, fleet footed and strong, if the universe were to implode and earth be reduced to an atom, this man would still remain, balanced on the edge of a piece of string somewhere, ball at his feet.
‘The Gaffer’, an acquaintance of mine not renowned for his subtlety, had joined me to watch the game. He didn’t have the same romantic view of Zidane that I did:
“Garlic, baguette eatin’, stripy jumpered, beret wearin’, slimy frog!”

If a doctor had witnessed The Gaffer’s outburst he would have diagnosed him with a nasty bout of ‘French Tourettes’. A close up of Zidane’s distinguished face had stimulated a surge of thoughts – everything he associated with France came out in one resentful rant. The words were venomous; he hated the French!

The Gaffer was not prejudiced; in fact, he hated all nations in equal measure. So, in the interest of equality, what Zidane received in hatred, Marco Materazzi, the Italian defender, received tenfold in mockery.
“Ow’s ‘e in a World Cup Final? He’s s***, ay he mate?”

As with a lot of The Gaffer’s wildly expressed opinions, what he said was somewhere between a question and a statement. On this occasion, I had to agree with him.

Marco Materazzi was a notoriously dirty player, formerly of Inter Milan and Everton. He was at Goodison Park for one full season, during which he was sent off three times before being shipped back to Italy.

Despite having come under intense scrutiny from the Italian media for his inept performances, here he was playing in the World Cup Final, eyes rolling around his head like a sinister deranged clown. He was extremely ungainly by Italian standards and would not have looked out of place as an extra for the film ‘One Flew Over the Cuckoo’s Nest.’

For every Zidane, there had to be a Materazzi.

Kick off was imminent.

Thirty Five seconds in and the drama had already begun. Thierry Henry clashed with Fabio Cannavaro and went to ground. He was down for a long time and, to all rational and objective human beings, he looked seriously hurt.

He shouted the same thing when we went to see ‘Lord of Rings’ at the cinema and Gandalf the Grey fell tragically to his death. The wizard from Middle Earth was a foreigner in The Gaffer’s eyes and thus was tarred with the same brush as the French and Italians.

Even when Henry was stretchered off and given smelling salts, The Gaffer remained cynical:

The idea that Thierry Henry was some sort of garlic junkie who feigned injury so he could leave the pitch for a line made me laugh. That only spurred The Gaffer on. He spent the next six minutes embracing his French Tourettes with volume and passion, whilst I tried to watch the game.

Seven minutes in and France had a penalty. You can probably guess which Italian journeyman gave it away …

I hated The Gaffer being proved right, but it was a lot quicker than him being proven wrong.

Zidane, the bald maestro picked up the ball, looking solemn and uneasy – to miss in his own showcase game would be unthinkable. He had formidable eyes that could not display fear, only induce it. His bowed head briefly awoke the possibility in my mind that he might not score after all …

“Yes!” screamed The Gaffer, punching the air with delight.

The ball had bounced down off the crossbar and back into play. Zidane had just missed a penalty in the World Cup Final. He turned and ran back toward his own half without so much as a flicker of expression on his face.

The referee blew his whistle and pointed to the centre spot. Bizarrely, a goal had been given! The Gaffer and I looked at each other in utter bemusement.

Zidane had conned the entire world into thinking he’d missed when he had, in fact, done something quite extraordinary. As he ran toward the ball, Zidane saw the Italian goalkeeper, Gianluigi Buffon, poised to dive to his right, so rather than hit the ball with pace, he simply chipped it toward the centre of the goal. It was more of a kiss than anything else.

It hit the underside of the bar and bounced down, distinctly over the line. The spin he produced from the laces of his right boot had made the ball bounce back into play!

As soon as he had stroked the ball with his foot, he was on his way back to his own half, safe in the knowledge that he had scored the most audacious goal in World Cup Final history.

Even The Gaffer had to admit that the goal was something special; he did so with complete silence.

If only it had ended there, while Zinedine Zidane was simply a genius …

The Italians were not the type of team to chase a game, rather the type of team you could knit a jumper to. They would score early on, probably from a corner, and then defend with eleven men behind the ball for the remainder of the game. Having gone one behind it didn’t take a master tactician to work out that Plan B would be imminent.
They took the game to the French.

In the nineteenth minute, Italy were rewarded for their pressure with a corner. Pirlo, the elegant Italian playmaker, swung it in beautifully.

The Gaffer wasn’t always as pleasant as this. The perplexity of wanting both Italy and France to lose the game had mellowed him somewhat. This was him at his most reasonable, and eloquent.

We couldn’t see who had scored at first, but the camera soon zoomed in to reveal the Italians hugging and kissing none other than Marco Materazzi. The lumbering Italian punched the air, knowing he had rectified his previous error and scored a goal on the biggest stage of all. I suppose Materazzi must have felt a bit like a pub singer, who had had somehow managed to get a gig at the Sydney Opera house.

And there was nothing the Italian could do to prove him wrong. If the Gaffer didn’t like someone from day one, they could jump in front of a bus to save his life and he still wouldn’t give them the benefit of the doubt.

I had always admired his conviction for a cause, but was dubious as to whether Materazzi would be worried that, despite scoring a goal in the World Cup Final, somewhere in the heart of the Black Country, a portly alcoholic quantity surveyor, who once wore a comic relief red nose on his genitalia for over a week, was questioning his ability.

I spent the next ninety minutes or so pointing this out to the Gaffer, while the game whimpered on, without incident, until …

Bang! We were drawn back to Berlin and the maestro himself. It was the 109th minute of the game and chaos was ensuing.

Marco Materazzi and Zinedine Zidane had been talking to each other. Zidane raised a wry smile at something the Italian had said. Materazzi continued to speak to Zidane, taunting him it would appear. And then the unthinkable occurred.

The French wizard, the greatest player of our lifetime, completely lost his mind! He squared up and launched his bald head into the sinister Italian’s chest, with all his might and majesty. Materazzi was floored. He went down like he’d been shot at by a sniper in the crowd. The impact was so fierce and purposeful that even The Gaffer, as cynical as they come, didn’t claim Materazzi had dived.

Zinedine Zidane had gone from legend to villain with one crazed impulsive action. Immediately, he was shown the red card, as a result of the offence being noticed by an eagle-eyed fourth official.
Zizou walked off without protest. His head was bowed, but for a brief glance at the World Cup trophy he was forced to pass on his way to the dressing room. It was a moment of pure tragedy.

This was the most sensational event we had ever witnessed; things are so much more shocking when they are not part of anybody’s script. It was most certainly not supposed to happen; a hero’s career tainted forever by a moment of unadulterated madness.

What made him do it? What possessed such folly?

A series of suggestions were concocted while we savoured the final ten minutes of extra time. My personal favourite suggestion is that the two were arguing over whose name was worth more in scrabble. Though, I fear darker words were spoken.

An earlier nipple tweak from Materazzi had failed to get any kind of rise from Zidane, where a few wayward words made Zizou deliver the most vicious head-butt we had ever seen. There are no winners with a head-butt; Zidane was prepared to hurt himself just so he could hurt Materazzi more, just so he could put him on the floor and look down on him. The Italian’s cunning had somehow flicked a switch within Zidane, blocking out all rationality, leaving only a swirling red mist.

Whatever had prompted his action, my hero Zidane had fallen from grace – and this changed everything in my head. I poured myself a straight glass of Tobagan rum and prepared to walk the plank.