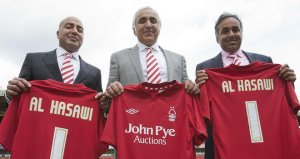 These days, fans of Championship clubs live in hope that eventually, if they’re extremely fortunate, their club will get taken over by a billionaire. Over the past decade, it has become the most likely method of securing safe passage to Premiership glory.

Strange then, that when the moment finally arrives, most supporters greet the news with somewhat caged celebration. For many it seems too good to be true.

Whilst the more optimistic amongst the Nottingham Forest faithful greeted the news of the Kuwaiti takeover by booking the day off work in order to drink champagne through a funnel, others exercised a greater degree of caution.

It’s understandable that, whilst excitement and expectation bubble away in the City Ground today, a wary anticipation still lurks, albeit silently. The majority of experienced football followers have learned to look the proverbial gift horse directly in the mouth.

There is good reason why those who bleed red blood won’t allow themselves to get too carried away, just yet. We only need glance across the River Trent to witness debris from the scene of a takeover gone wrong. The Notts County revolution turned out to be an underwhelming false dawn.

Furthermore, the fact that once proud Portsmouth are flirting precariously with extinction, thanks to the misgivings of foreign owners, has instilled in us all a stark realisation; the cost of securing large scale investment could well be impending doom.

But fear not. The Kuwaiti takeover is of a different ilk.

Every sinew of my football shaped soul tells me that the Al-Hasawi family, unlike many who’ve gone before them, are not soulless tycoons, seeking to parade our beloved club as a crude fashion accessory. They are football people, who genuinely share our passion for this great club and its illustrious history. They want to be a part of it. They want to move us forward.

The takeover doesn’t have the feel of a power-crazed consortium delving naively into something they don’t truly understand. Rather, the Al-Hasawi family appear to have vast experience of managing sporting ventures such as these. They have been calculated and thorough in their approach to obtaining ownership of Nottingham Forest and I fully expect this to continue over the course of their tenure.

If you need proof, look no further than the appointment of Sean O’ Driscoll as first team manager. It was not only a refreshingly shrewd appointment, in terms of his managerial prowess, but it also signals the owners’ desire for Forest to play the sort of football the fans so desperately want to see.

In my twenty-odd years following the club, I’ve found Forest do best when playing attractive passing football. Forest fans don’t want to see pretty football for the sake of it; they also believe it to be the route to success. O’Driscoll is a football purist, with a wealth of coaching and managerial experience, and as such he is the ideal choice.

Although he achieved great things at Bournemouth and Doncaster, I believe it’s the visible impact he had upon the players’ confidence and the team’s style of play last season that convinced the Al-Hasawi family he was the right man for the job.

Perhaps the owners’ only mistake was to use the word ‘iconic’ within their original specification for the post. It was a word that journalists desperately clung to like a drunk clings to the last remnants of a Friday night kebab. Personally, I would much rather have a good manager than an iconic one!

In the midst of managerial speculation, we were linked with Harry Redknapp, Glenn Hoddle, Gordon Strachan, Roy Keane and Mick McCarthy. Considering that, in accordance with these rumours, we seemed to be working our way through the Euro 2012 pundits, I was just pleased we didn’t end up with Andy Townsend.

With Sean O’Driscoll safely at the helm, I genuinely couldn’t wait to renew my season ticket. Unfortunately, my trip to the ticket office threw up a nasty surprise. They tried to charge me £800-00!

I was about to question how it could possibly be so much, when I had one of last season’s matchday programmes pushed in front of me. I had foolishly declared that if we ended up signing Adlene Guedioura (who was on loan at the time) I would pay double for my 2012/13 season ticket!

Let this be a lesson to you all; never put anything in writing!

The reason I made this audacious claim at the time was that it seemed so unlikely we could sign a player of Adlene’s immense calibre. His arrival at the club on a permanent deal signifies that the whole club has stepped up a level.

Having already proven that he’s a class above this division, Adlene Guedioura, renowned for being able to behead an otter from 30 yards, was the best possible signing Forest could have made. It’s a landmark signing that has subsequently triggered the capture of a host of impressive players.

The most wonderful thing about football is that it never truly ends. As the final whistle blows on the last game of one season, we each start looking forward to the opening day of the next.

Finally, it’s here … and thanks to the Al-Hasawis we can legitimately dream about our club becoming great again.

It surely augurs well for Forest that the literal meaning of ‘Kuwait’ is ‘fortress built near water’. With the unyielding support of those who proudly stand within it, the City Ground, alongside the River Trent, could be an impregnable fortress once more.

Come on you Reds!